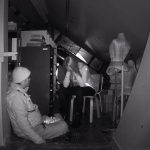 Happy Christmas from the entire Haunted team, and our friends at Eastlink Community TV.

Enjoy a holiday Haunted marathon, with the complete five episode Queens County Museum arc from the second season of Haunted (with commercial breaks removed) as the team returns to Liverpool, Nova Scotia, for a re-investigation of the location where their adventure began a year before.

Produced in association with Eastlink Community TV, and with assistance from the Nova Scotia Film and Television Production Incentive Fund.